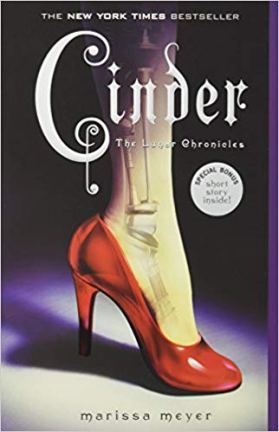 “I’m sure I’ll feel much more grateful when I find a guy who thinks complex wiring in a girl is a turn-on.”

Goodreads Synopsis:  Humans and androids crowd the raucous streets of New Beijing. A deadly plague ravages the population. From space, a ruthless lunar people watch, waiting to make their move. No one knows that Earth’s fate hinges on one girl.

Cinder, a gifted mechanic, is a cyborg. She’s a second-class citizen with a mysterious past, reviled by her stepmother and blamed for her stepsister’s illness. But when her life becomes intertwined with the handsome Prince Kai’s, she suddenly finds herself at the center of an intergalactic struggle, and a forbidden attraction. Caught between duty and freedom, loyalty and betrayal, she must uncover secrets about her past in order to protect her world’s future.

Characters: I genuinely LOVED Cinder as a character. She was sassy, hilarious, and pretty badass if I’m being honest. I also LOVED Iko; I wish we could have seen more of her and some of the other minor characters as well. I did like Prince Kai too, even though the romance between him and Cinder was just basic infatuation.

Plot: If I had to rate the plot I would give it a 15/20. The plot kept me engrossed in the book, but it was just very predictable. However, this did not make me not want to continue reading like it might in other books. The plot was interesting enough that even if I could predict what was going to happen, I still wanted to read/enjoyed reading it.

Pacing: This book is VERY SLOW in the beginning. This was a reread for me, so I got through it a lot easier than the first time I read it. Also, the end of the book is so action-packed that I feel like certain things happened a little too fast. I’ll explain this later on in the review because there was one moment I just really did not understand.

Originality: This book was very unique to anything I’ve read! It used the themes from Cinderella for the retelling aspect but completely made it its own! It was so original that I’m still not positive which genre the book is meant to be. There was magic, a dystopian future, and science fiction aspects as well. I also have to say, I’m a sucker for books that have plagues or epidemics…. that sounds horrible and I don’t know why, but I just LOVE books that include that in the plot!!!

Writing: I really enjoyed Meyer’s writing in this novel! I thought she did a very good job with descriptions, giving me just enough to paint the perfect picture. I also just love how funny she is. In all honesty though, she did use some statements way too much. ex: bile in the throat…. but at the same time, that reinforces that Cinder is also human so *shrugs* As stated previously, her pacing is a little off, so I did find myself skipping paragraphs at times (mainly in the first half/when the end got intense).

Ending: That ending was INTENSE. The last 70 or so pages of the book leaving you reeling, wondering how things are going to turn out for Cinder! However, I did feel like one scene was very rushed, to the point that I’ve read the book twice now and still am not quite sure what happened???? I wish I could explain more but I don’t want to spoil. Overall great ending that made me want to continue the series!

Thank you so much for reading my review! I really hope you enjoyed, and if you want to chat about this, feel free to comment! 🙂

Want to read this book? Find it here!

Published by The Radiant Reader

View all posts by The Radiant Reader